Container Network Interface is a great approach that allows to build container networking using different control and forwarding plane implementations available for Linux. In this post lets make quick introduction into Linux network namespaces and Container Network Interface. First of all to get better understanding what is CNI we will look into linux containers network principles. 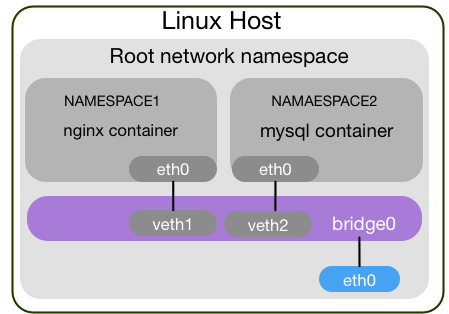 This diagram represents the way how network namespaces are organised on the typical node which uses containerisation.

Usually there is a bridge interface that called docker0, kbr0, cni0 and etc. For simplicity we named it bridge0. This bridge interface links together interfaces which are named vethXXXXX. I guess you noticed that if you are running couple of docker containers on your linux box there are two vethXXXXX interfaces in your ip addr or ifconfig output.

This interfaces are representing a root namespace leg of the link between root and container namespaces. Lets look at the output below:

We have a docker0 bridge with two interfaces connected to it: vetheeed635 and veth78a60be. To find out its opposite leg index, we can use ethtool:

peer_ifindex 7 and 11 are indexes of the eth0 interfaces inside docker containers. Using this indexes you can find out interface name and configuration from ip link output. Inside a container, this vethXXXX interfaces will have a container namespace link leg. We can use ip link tool to print out information:

We can check with ethtool interface index in the root namespace:

ip tools allow us to execute ip command family under particular namespace. Docker by default does not expose it into /var/run/netns because directory because it is using own libcontainer. Nevertheless we can do this creating a symlink from process network namespace to /var/run/netns directory. This directory should be created if does not exists.

Having this information we can connect additional link inside the docker container:

Inside the container we can run ifconfig to check that we have actually built this link:

CNI has several plugin types. The most important of them are main and ipam (ip management). Main plugin does manipulations with network namespaces, e.g. create veth pair, linking it inside the container, connecting to a bridge and etc. IPAM plugin manages IP setting allocations.

If we look inside one of the scripts from here https://github.com/containernetworking/cni you will be surprised that it uses very similar principal that was described above.

We are starting docker container without network:

And figuring out the path of the namespace:

Then we can execute our CNI plugin that will create an interface, assign IP address, mask and gateway. This all happens by means of golang library which is the part of CNI project github.com/containernetworking/cni/pkg/ip. Library itself uses github.com/vishvananda/netlink, which is golang implementation of ip tools.

Finally the script connects network namespace of the first container to the new one, where all settings already configured and linked inside Root namespace in the way which is defined by particular CNI plugin:

If you use CNI plugins together with Kubernetes binaries should be stored in /opt/cni/bin.

Arguments are passed in the plugins as environment variables:

Plugins code worked pretty well for me with golang compiler 1.6.

Here you can find set of functions that can be used to create veth pair ip/link.go. For example:

This function creates pair of linked interfaces similar as we did above with veth-ns-7863 and eth0-ns-7863.

Function ns.WithNetNS from this package github.com/containernetworking/cni/pkg/ns allows to execute some code inside container’s namespace that was passed as an argument.

Having all this and examples from CNI github repository we can easily implement our own plugin.

First of all we should define NetConf struct

types.netConf will include standard struct parameters and we can define our own. In this particular example we added ImportRT and ExportRT (Import and Export route target for out BGP routes).

Next we can implement methods based on the code from one of the plugins:

In this particular example we wrote function that allows us to execute net.Interfaces() under the given network namespace. It is analog of the command: ip netns exec $NS_NAME ip link Then we can extract Hardware Address (MAC address) and the name of the root namespace leg of newly generated veth pair.

That is it for today, in Part 2 we will discuss two interesting projects BaGPipe BGP and goBGP. We will use them together with CNI to build Kubernetes networks.